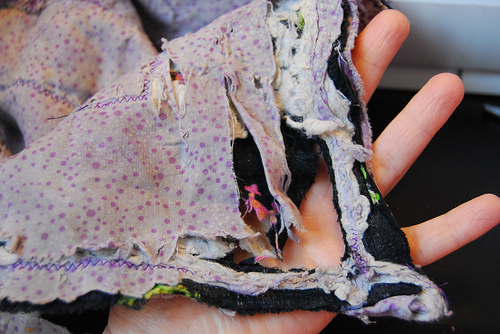 Jerusha thought about the dreams and nightmares that had plagued Jenny all her life.  Often in the early days, when Jerusha had awakened to the sound of her adopted daughter screaming in the night, she had been very concerned.  But Jenny had been so volatile as a child that as the years passed, Jerusha had come to discount the dreams as just a part of her daughter’s temperament.  Now she saw that the dreams were born of some terrible event, something that had torn Jenny inside.

Jerusha examined the quilt again.  She noticed all the colored pieces that were either torn or missing and she was glad that she had saved the original silk material.  The quilt had hardly been used so there were no worn places, but the seam where she had torn open the corner was frayed and the cream-colored cotton backing had also frayed where she pulled the seam apart.  She examined the stitching.  As a child, her tiny, even stitch had amazed her grandmother.  Most quilters would finish a quilt and use around seventy thousand stitches.  Jerusha had used over ninety thousand in her first complete quilt when she was eleven years old.  She remembered her grandmother’s words as she looked over the work.

“Ja, your stitch is so small and even,” said her grandmother.  “It is as though you have been quilting all your life.”

As she planned the repair work, her thoughts flew back to the wonderful days when she had learned the art of quilting from her grandmother.  Those had been the happiest days of her childhood and she could hear Grossmudder Hannah’s voice speaking gently to her as she helped Hannah cut the pieces for a star quilt, the first Jerusha had been allowed to work on.  She remembered watching as her grandmother cut the chosen pieces of fabric into perfectly matching parts.

“If the quilt is going to be even and symmetrical, the pieces must be true,” she said.

She let Jerusha try her hand, and even on her first try Jerusha cut the pieces straight and perfect.

Once the pieces were cut correctly, Gossmudder had pieced them together with pinpoint accuracy.

“If the quilt is not aligned properly, even in just one small part, the whole thing will look off-balance and might pucker,” she told Jerusha.  “If the design is to be even and pleasing to the eye, each individual piece of fabric must be stitched together just right, in order for it to fit together properly.  You must trust your own eye and sewing skills for measurement and accuracy.  It is a gift not every quilter has and it is from Der Schöpfer-Gott, the Creator.”

As the memories flooded over her, Jerusha began to see something that she had never seen before.  For her, the completed quilt had always been the purpose for her life, and the process of making the quilt had only been a means to an end.  Now she began to see that the process was everything, and the finished quilt was only the revealing of the work that had been put into the quilt.  That understanding was like a light turning on in her heart.

Jerusha began to see the correlation.  Each piece of a life had to be laid in perfectly and if the pieces were uneven or not stitched together properly, the result would not fulfill the Creator’s purpose for that life.

Jerusha remembered something Reuben had taught her.  They had visited a neighbor’s farm one day and watched as the men helped their neighbor tear down the framing of what was to be a new barn and start over.

“Why are they tearing the barn down?” she had asked Reuben.

“Brother King made a mistake when he laid the foundation,” Reuben said.  “It was not level and true.  It was pointed out to him when the first wall went up and the men had a great deal of difficulty plumbing it up.  You see Jerusha, when a foundation is not laid properly and you build on it, everything in nature, even gravity itself, conspires to drag that wall down.  But if the foundation is true, then when you build on it, gravity pulls the wall straight down onto the foundation and it will stand for years, supporting itself.”

She had wondered about Reuben’s words that day, not really understanding, but now as she looked at the quilt, they became clear to her.  Everything in Jenny’s life had been built on a poor foundation and so even nature had worked against her, robbing her of peace and joy and leaving her with a sense of incompleteness.

That is what happened to Jenny.  The foundation of her life was not laid in straight and true and she has been struggling to build on that poor foundation.