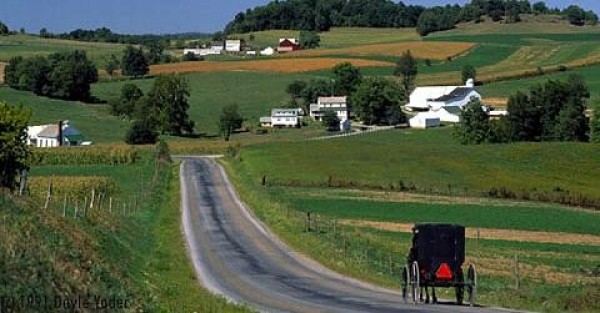 Jenny sighed again as Jonathan crowded back into her thoughts.  She stood up, grabbed an empty box and quickly put the letterbox and the rest of the items from the dresser top into it.  Then she folded up the linen piece, placed it on top of her other belongings and closed up the box.  She set it with the others, piled the clothing on a chair by the door, and then pulled the quilt and the linens from the bed.  She folded them and put them into the last remaining empty box.  She surveyed the stack of boxes and then went to the closet and took out her suitcase.  Carefully she packed her clothing in it and snapped the latches shut.  The click of the latches echoed in the room like tiny gunshots.  Finished.  Ended.  She took a deep breath.

There!  I’m done!  That wasn’t so bad.  Cousin Borntraeger can carry all this out for me and take it to the storage place.  Mama said to just bring our clothes for now.

She heard boots on the front porch and her heart leaped. Then just as quickly reality smashed her down.  Another deep sigh was torn from her.  How many times had she heard Jonathan coming up the front stoop and walking across the porch to the door?  It was always such a comforting sound at the end of the day.  And now…

There was a knock at the door and then a voice calling.

“I’m here, Cousin, in the bedroom.  Can you help me with these boxes?”

Lem Borntraeger walked down the hall and into the room.  He glanced around at the emptiness and pulled his black hat from his head.

“Jenny, are you sure this is what you want?  We all want you to stay.  I know it won’t be the same without Jonathan, but you have family here.”

Jenny looked at her tall cousin.  He had been one of the blessings God bestowed on them when they had come to Paradise ten years before.  He had taken her into his heart from the first day they met, and after she and Jonathan married, he became their good friend and helper.  She reached over and patted his arm.

“I have to go home, Lem.  I just need to be with my mama and papa.  You will run the farm and it will prosper in your care.  For me, there are too many memories.  Sometimes it feels like my remembrances of Jonathan and our days here are like cobwebs that stick to me and hold me fast.  They keep me from going on with my life.  And I need to go on now or I will die inside.”

“Will you ever come back?” Lem asked.

“Right now I would say no,” Jenny answered.  “But who knows the road ahead?  We may come back someday, when I can be in this house without weeping every time I turn around.”

He stood for a moment with his hat in his hands.

“Jonathan was a good man and he was my friend.  I will miss him deeply.”

Then Lem put his hat back on and smiled.

Jenny watched him as he picked up two boxes and went out.  She took one last look at the room and then turned to go.

She stopped and turned, thinking she had heard Jonathan’s voice.  But it was only the echoes of unspoken longings that filled her aching heart.  She went one last time to the bed and touched it softly.

“Jonathan, oh, Jonathan.  You are my true love.  There will never be anyone like you for me.  Thank you, my dearest, for loving me so deeply.  Thank you for being a good man, a wonderful husband and a loving father to Rachel.  May God be with you on your journey.”

Jenny stood silent for a moment and then picked up her suitcase, turned, and left the room.  She went into Rachel’s room, gathered up the few things that were still out and packed them in her daughter’s suitcase.  Then she took Rachel’s hand and together they walked down the hall through the empty front room and out onto the porch.  A carriage waited for them in the driveway.  She boosted Rachel up as Lem put the suitcases in the back and then she climbed in.  She nodded to the driver who clicked his tongue and set the horse in motion.  The carriage rolled slowly down the driveway.  Jenny looked straight ahead.  She would not look back, she was going, it was done.  But then just as the horse turned onto the main road, her resolve crumbled and she looked back.  The blue, two-story house stood in the middle of the now harvested fields.  As she looked she could see Jonathan behind the plow, waving to her as the rich soil turned and broke beneath the sharp blade.  She could see his smile and his wonderful eyes.  She could feel his strong arms around her as they stood together on the porch, looking out over the land – their land – in awe of the blessings of God.  She put her face into her hands and silently began to weep.  The clopping hooves beat out a slow and mournful cadence –