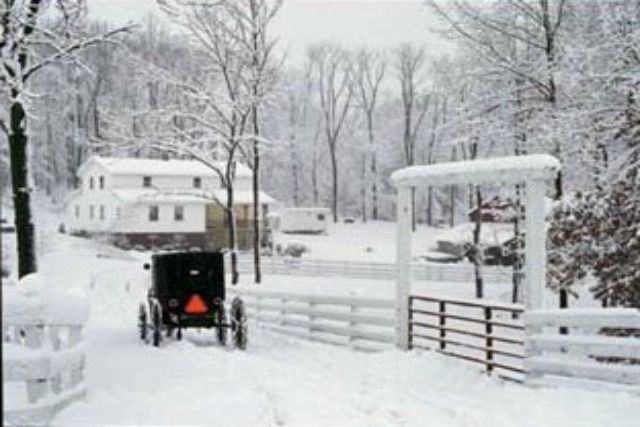 Two weeks later, Daniel was hanging around outside the post office. He had checked for a reply from Rachel as often as he could for the last week, but he had received nothing. Several Amish folk had come and gone this morning, and he was waiting until he could go in unobserved. Rachel had sent the first letter to Daniel care of Mrs. Shoemaker, the postmistress, so Daniel wouldn’t get in trouble. So he was expecting another letter to arrive in the same fashion.

Finally, the coast was clear and he went inside. Mrs. Shoemaker motioned for him to come to the counter. She looked around and then leaned forward and whispered in a conspiratorial way.

“Daniel, I have something for you from Connecticut. I hope it’s from Rachel. It’s too bad you kids can’t just talk to each other instead of sneaking around. I never understood this shunning nonsense.”

Mrs. Shoemaker saw the hurt in Daniel’s eyes and stopped.

“I’m sorry, Daniel. I didn’t mean to offend. I’m sure your customs serve their purpose, after all.”

She reached under the counter, pulled out a small manila envelope, and handed it over the counter to Daniel. Daniel took it eagerly. The postmark was from the same town in Connecticut, but the return said Augusta St. Clair, not Rachel. The address was typed on the outside:

Daniel tore open the envelope. Inside, he found a folded sheet of paper. He pulled it out and saw something else inside. It was the letter he had written to Rachel. The letter was unopened. Daniel looked at the letter, put it down on the counter, and unfolded the sheet. It was heavy linen stationery with the St. Clair family crest on the top above Augusta St. Clair’s name and post office box in Greenwich, Connecticut. The message was short and to the point.

I am writing on behalf of my granddaughter-in-law, Rachel St. Clair. She wishes me to inform you that she wants nothing further to do with you or anything having to do with her old life. She requests that you cease annoying her by writing letters, and that you refrain from attempting to communicate with her in any way. If you persist in your efforts, we will be forced to seek injunctive action.

Daniel’s heart sank. He stared at the letter from Augusta and then at his unopened letter to Rachel. Something didn’t feel right. He looked up. Mrs. Shoemaker was making strange pointing motions with her eyebrows. Then he felt a large hand rest on his shoulder.

Startled, Daniel looked around. His father stood behind him, looking over his shoulder at the two letters in Daniel’s hands. It seemed Mrs. Shoemaker suddenly remembered something she had to do in the back room, for she disappeared. Daniel faced his father.

Reluctantly, Daniel handed over the letter from Augusta. His father read it and then sighed. He folded it and handed it back.

Daniel pulled away. “It is personal, Papa.”

“Also, das ist persönlich? And is it from Rachel?”

Daniel trembled under his father’s stern gaze. “Nein, Papa. It is a letter I wrote to Rachel.”

Mr. King looked at his son. And then he motioned Daniel to follow him and walked outside. He put his arm around Daniel’s shoulders. “Walk with me, son.”

They walked down the steps and turned left. The King’s buggy was standing next to the yellow metal post next to the phone booth at the side of the building. Daniel’s mother was waiting in the buggy, and she started to speak as they passed. But Daniel’s papa motioned to her and kept walking. The fallen leaves crunched under Daniel’s feet as he walked with his father, and the crunching sounded like bones breaking. The stark, bare limbs of the trees stood up like withered arms reaching out for a last bit of life from a cheerless sky. They walked a few blocks before Mr. King spoke. “You know that Rachel is under the meidung, the bann?”

“And you know that it is forbidden to communicate with her because she has chosen to live outside our faith and our Ordnung?”

Mr. King stopped and turned to his son. “Daniel, you are a good son. You are strong and faithful, yet you are also kind and gentle. You have never given me any reason to be other than very proud of you.” He looked down at the letter in his hand. “The Ordnung may seem strict and without grace. It may seem to you that we are keeping rules by the letter of the law and not the spirit. And yet I know that the Ordnung are good if we understand that they have been written to protect our faith and our people and to keep us pure and undefiled from a world that is walking with the devil.”

Daniel’s father went on. “I will not say anything about this to anyone. I trust you and know that except for your deep love for this girl, you would never have broken our rules.”

Daniel dropped his eyes. The pain in his heart was almost more than he could bear.

“But I also know that if you continue on this path, it will only bring you great sorrow.”

Daniel looked at his papa. “Daed, Rachel is in trouble. I just know it. She never would have said those things to me. Something’s wrong. She sent me a letter a few weeks ago, and I could tell she was troubled.”

“Of course she is troubled. Sie wird gestört. She disobeyed her father and mother, she married outside her faith, she is bound by enormous wealth. Son, you cannot serve Gott and mammon, too. Her sins have found her out and her conscience is tearing at her.”

Mr. King held up the letter from Augusta. “Daniel! You are so bound up by this girl that you cannot see the truth. You are so blinded that you don’t see what this is. This is not a letter from—”

He glanced down at the signature.“—from Augusta St. Clair. It is a letter from du lieber Gott. He is telling you to stop, to give her up, to get on with your life. Don’t you understand?”

There was a long silence while father and son stared at each other. Finally, Daniel spoke.

But he did not understand at all.

From The Amish Heiress – Book One in The Paradise Chronicles by Patrick E. Craig