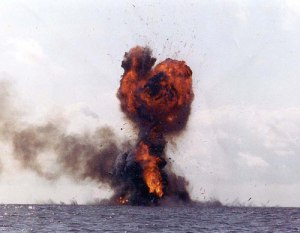 The grey-green sea rolled in long, choppy swells beneath the boat. The waves were endless, moving toward him out of the mist and disappearing away toward the unseen horizon. It was dark, so dark, and the strange smell of the salt water was overpowering and somehow terrifying. A stiff breeze drove the icy spray off the tops of the waves into Jonathan’s eyes. He raised his hand to wipe his face, but the mist and spray were continuous, blinding him. The chill of winter not yet dead… the gulls circling behind the boat… the plaintive cries whirling away on the wind. The sea ominous and dead…

He stood in the darkness and the cold and the spray and the waves, the endless waves, rolling, rolling, rolling by and where were they going? Suddenly a great longing to see Jenny and Rachel swept over him like one of the swells rolling ceaselessly and vanishing away, beyond his sight. He was lost, gone, alone on the bridge of a ghost ship that cut through the waves like a sword… He looked through the window into the wheelhouse, but there was no one to pilot the boat. Where was the captain? Then he felt a hand touch him. He turned to see his father standing there with him, but his father was dead, dead as the grey-green waves. Or was he? He felt his father’s hand squeeze his shoulder and then he smiled.

“Thank you, Son,” and then his father was gone, gone like a cool breeze that touches the face on a blistering day in the desert and then slips away leaving only regret behind…

But I’m not in the desert, I’m on this boat on the ocean and I’m alone and lost in the dark and I’m freezing… Dad! Dad! Help me, please…

Then the boat lurched to the right as he heard the muffled explosion. The huge craft twisted like a snake and the abrupt distortion of the boat’s course threw Jonathan to the deck. As he lay there, stunned, he saw his mother come out of her stateroom and try to make her way forward.

My Mother! But she’s dead too! What’s happening?

Then there was fire! Fire and smoke blowing through the middle of the boat… And then he was deep in the water, and above him he saw the churning waves. It was cold, so cold and he couldn’t breathe and then he was swimming, swimming upward toward the light and the fire, the fire on the water… His head broke the surface and he gasped for air. Burning diesel fuel covered the waves. He was in the flames and he felt the fire burning his face, burning melting, reaching for his eyes…

And then he saw his father again and his mother was with his father, not twenty feet away on the boat, and they were smiling.
“Dad, Mom!”

His father looked straight into Jonathan’s eyes. He reached his hand toward Jonathan but he wasn’t afraid… Jonathan couldn’t hear him over the wind, but he saw his father’s mouth forming words.

At that instant the flames from the burning diesel fuel below deck ignited the propane tank in the galley and the Mistral exploded with a huge roar. Jonathan struggled in the water. He was in the fire and the water, burning and drowning. He looked up as debris from the boat came flying toward him. He watched in terror as the grey-green waves rolled over the deck             and Mistral sank. Within seconds there was nothing left except some floating pieces of wreckage driving west before the howling wind.

The Amish Heiress is a work in progress from The Paradise Chronicles by Patrick E. Craig.