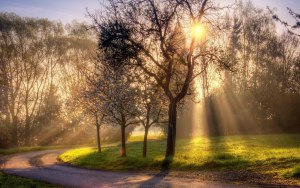 Daniel King stood on the high knoll behind his father’s house. It was just before dawn on an early April morning. Far away to the east a dark row of trees marked the horizon. Long, smooth clouds drifted through the slowly brightening sky. A golden glow began to grow around the tops of the trees and as it did, the billows above were touched with a beautiful orange that faded into a dusky pink that reached toward heaven. Above it all, the deep indigo of the dying night held time fixed in perfect suspension. It was that mystical moment, just before the day begins, when all nature holds its breath, as though waiting for an unheard command from on high. Then the tiniest sliver of sun peeked over the eastern hills and the world exhaled. A small breeze stirred and Daniel felt the soft brush of nature’s breath against his face. A familiar peace flooded over him. His heart was filled with a deep sense of connection to the land and especially to this place.

The light gathered itself into golden shafts that pierced the cobalt depths and the green fields of Paradise materialized below him, reaching away to the east. One by one, Daniel began to pick out the Amish farms that surrounded Solomon King’s property. Off to the right was the Beachey place with the finest milk cows in Lancaster County. Up the road, nestled in a thick stand of Chestnut trees were the Masts, and beyond them, the Nissleys and the Ottos. The three families were all related – carpenters and woodworkers that produced wonderful handcrafted furniture. Down the hill to his left he could see the potato fields of the Glick farm, and beyond that the Keim’s first hay cutting was a bright patch of green that prophesied good feed for the King horses this year. Daniel could almost see the names on the mailboxes that lined Leacock Road – Umble, Troyer, Swartzendruber, Raber, Petershwim, Shetler, Stoltzfus, Yoder, and Zook. Each name held a story, not only for Daniel, but also for the Amish community that had lived and prospered here since 1720.

Daniel’s eyes turned to the blue farmhouse a half-mile away. It was the old Borntraeger place, now the Hershberger farm. It, too, was part of the long continuum of Daniel’s people in Pennsylvania, for Jenny Hershberger was a Borntraeger, and her story was a great illustration to Daniel of how der kluge und liebende Gott had kept his hand on the Plain people of Lancaster County and held them to their inheritance.

In a way we are like the people of Israel, who have an inheritance forever in their land. Gott promised it to them and He always keeps His promise.

Daniel sighed and half-heartedly kicked at a large stone that was half-buried in the dirt. After a few nudges the stone broke loose and rolled away down the hill. Daniel watched as it rolled and bounced down into the small creek that meandered along the base of the knoll.

That stone is Rachel. She wants to go rolling away and she will. She will fall into the river of the world and be swept away and leave this place. And she will never know the peace that is here, all around us.

A small black buggy rolled along Leacock toward the old Philadelphia Turnpike. Daniel could not make out the driver’s face, but he didn’t have to, for he knew that buggy well. A big white gelding with a flowing mane pulled it.

It’s Tuesday and Andy Peterswhim, is on his was to the market for his mother.

As Daniel watched the buggy disappear around the tree-shadowed bend in the road, he took comfort in the symmetry of his life. The seasons came and went, the crops were planted and then harvested, the people were born, they lived, and they died. It was all part of a mysterious cycle that set his people apart, a cycle that only an uncluttered heart could see. It was timeless, stretching away into the past and moving forward into the future, like a great river that is always changing, filling its banks, ever-moving, catching the sun with a million different diamond-sparkle facets of its surface and yet somehow, to the casual observer, always the same, always there. For Daniel, that was the secret of the Plain Way. It was always there, appearing to be fixed, yet when each day started, it was always a new journey, without any missteps to mar the way. If a man was accountable for his actions, to himself and to others, and spazieren gegangen im Licht des Gottes there was much grace for living and every thing that happened seemed to work together for the good.

With a deep sigh, Daniel turned and started down the hill. The path through the small woods was as familiar to him as the walls of his room. He had been coming to the top of the knoll since he was a small child and it was, for him, a castle keep where he could take refuge from the pressures of the world and sort out his thoughts. Many times when they were small children, he and Rachel had come here to play, but then Rachel had moved away and it seemed as though a great piece of Daniel’s life went with her. And later, when she returned and began to blossom into womanhood, the dictates of the ordnung had separated them even more and Daniel had to content himself with watching Rachel grow lovelier each day from afar.

He stopped and picked up a broken-off branch that had fallen from the huge Buckeye tree that stood a little below the crest of the ridge. There had been a storm a week ago and the ancient Chestnut had shed many small branches and limbs, and yet it still stood, strong and defiant, unmoved from the place it had been growing for over one hundred years. To Daniel, it was a symbol of all that was permanent in his life. It was under that tree that he and Rachel had pledged to be friends forever when they were only six years old.   He began to absent-mindedly whisk the trail in front of him with the branch as he walked, and as he did, the old yearning rose inside. Rachel! Rachel! Sie leben immer in meinem Herzen! He struck the stick against a small bay tree as he walked past and the branch broke in his hand. His heart sank as he tried to come to grips with his feelings for the girl. She was an enigma to him. Daughter of an Außenseiter father and a half-Amish mother, Rachel had not lived the normal life of an Amish girl. When Rachel was seven her father disappeared and Rachel and her mother, Jenny, went to Ohio to live. They were gone almost three years and then suddenly one day, Rachel was back at the farm. But she was no longer the carefree child that had been Daniel’s playmate. Word filtered back to Paradise about the tragic events that had taken the lives of Jenny’s parents, and Daniel began to understand the deep sadness that wrapped Rachel like a winter coat.

Daniel tried to re-establish their friendship, but Rachel was stand-offish and quiet. Once Daniel asked her whether she still liked him. She would not answer him, but Daniel knew somehow that Rachel was afraid of getting close to anyone. And then when her father had literally come back from the dead, Rachel grew even more distant. Jonathan had been an amnesia victim for almost eight years and he still struggled with physical issues that made him unstable emotionally, and the volatility played havoc with his relationship with Rachel. With no where else to place the blame for her circumstances, Rachel had come to blame being Amish as the root of all her sorrow and confusion. Now she looked elsewhere for her joy and Daniel could see it in her eyes when he was with her. Even when things seemed normal between them, it was as though she was looking through him, past the everyday of life in Paradise, to a place that Daniel could hardly even comprehend. When she began talking about going away to school, his heart ached. And yet Daniel could see the gift in her, a gift of healing and caring and he knew that it was something that Gott had placed within her. So Daniel’s heart was torn. Torn between wanting to be close to Rachel again and letting her go to fulfill her dream, if that would make her happy.

The Amish Heiress ©2014  A Work-in-Progress
*Characters and most location descriptions are fictional and do not represent actual people or residences in Paradise, PA.